This past Monday, my Hebrew teacher took members of our class to A Walk of Art: Visionary Shoes, an exhibition of footwear by Bezalel Academy graduates. She asked me to do a write-up on the show for the school’s PR department and I thought I would put it here—please excuse the aspects that might be slightly juvenile in my opening paragraph and so on, I thought they were contextually appropriate. Anyway, it was truly a privilege to gain further insight into the ingenuity of those involved and although the heels, stilettos, and sandals contained in the presentation are thoroughly unusable (at least they appear impossible to walk in), I would recommend going in the next two weeks while it’s still on if only for their aesthetic value.

One quiet February afternoon, seniors in Ms. Barak’s Modern Israel seminar journeyed beyond the Upper East Side, heading to the Bowery for a special presentation at Parasol Projects. Upon entering the gallery, students were immediately struck by a sprawling installation of avant-garde footwear sitting atop various platform boxes. In their viscerally mesmerized state, everything else would have to wait as phone cameras were pulled out and animated commentary ensued.

Curator Ya’ara Keydar, an Israeli-born fashion historian now based in New York, was charged with guiding the pupils through these compelling visuals. She began her talk by introducing the exhibition’s fitting title—A Walk of Art: Visionary Shoes—a heading which, in deeming the works thoroughly “innovative,” immediately indicated its focus on the boundary between fashion and art, a thread that would be explored throughout. Emphasizing the show’s experimental tone, Keydar next explained its foundational purpose: to spotlight alumni and students of Bezalel Academy, considered one of the country’s finest bastions of creativity. Israeli culture fundamentally involves a fusion of past and present to envision the future, and through pioneering cutting-edge techniques such as 3D printing alongside more traditional methods of design, Bezalel’s approach epitomizes this sweeping synthesis; even the school’s name places a Biblical episode in the context of modern life.

Keydar repeatedly drew on similar ideas in building the collection, which spans nine unique themes and comprises over sixty total works. “Natura Morta” is the first of these subjects, consisting of about eight different styles as a reflection “on the ephemeral and the transient.” Highlights include Sigalit Landau’s Edge—a pair of shoes suspended in salt from the shrinking Dead Sea—and heels by Nimrod Gilo, which employ motifs of flora and fauna to subtly suggest the underlying savagery of both man and beast. 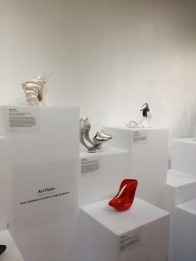 “Art Form” (see examples above) follows with unorthodox riffs on art history, borrowing from ancient Egyptian iconography (Omer Saig’s Nefertiti), 18th century kitsch (Nadin Ram’s Barococo), Pablo Picasso’s ubiquitous oeuvre (Mor Paola Gaash’s Gaston Persona), and Salvador Dali’s sensual tribute to Mae West (Gal Souva’s Lip Gloss Shoe). “Carved,” the subsequent section, renews one’s appreciation for folksy craft by promoting all sorts of wooden shoes, sculpted into the shapes of horses, whales, ships, anatomy, Jenga fragments, Bauhaus architecture, etc.“Neo Geo” takes its predecessor’s eclectic and fantastical prototypes to the next level, demonstrating how advanced technologies can bring translucent Pink Floyd-esque sandals (Neta Soreq’s Prism Shoe), multi-layered slingbacks with decks reminiscent of Marcel Duchamp’s Nude Descending a Staircase No. 2 (Emanueel Emy Fang’s Le Scale), or platforms resembling a metal chair (Shira Manor’s The Shoe as Hammock) to fruition. There is a gentleness and fragility to these works that is reinforced by “In a Relationship.” This division examines emotional and physical bonds, utilizing connective devices that treat multiple shoes as a single structure to symbolize our weaker attachments or vulnerabilities. Agam Bar Ilan recalls Dorothy’s ambivalence in the Wizard of Oz by offering two divergent footbeds, just as Boris Spheizman mimics Cinderella’s naivete with a slipper of Venetian glass. Likewise, Or Kolker’s subversive Trust requires a duo to hold each other close and share their movements; without one, the other will fall. “Painfully Beautiful” has an equally defiant mood—Eitan Bartal’s Anti Heels, Alexandra Rudshtain’s Surrendering Construction, Sapir Tzidon’s Armor, and Tal Tabori’s Little Shoe Box see footwear as a tool for internal and external oppression and female objectification, questioning the very intentions behind its development. With a return to raw materials, “Primary Source” imagines stratums of rock as fashioned from leather, indicating the passage of time (Or Kolker’s Between Layers). Again underscoring religion’s primacy even in the minds of secular Israelis, parchment leather meant for Torah scrolls becomes a blanket covering chiseled wedges (Noa Rubin’s Sacred pulse). Ritual is prominent, too, in “Providence,” where what seems at first like ballerina flats are really boots composed of wrapped strands to evoke Judaism’s attention to the cyclical. Their thick white strips allude to Tefillin bands and also connoting the rites of celebration and mourning represented by Jewish wedding shrouds (Dafna Amar’s Cycles). In another exercise in the supremacy of collective memory, Kobi Levi’s Slingshot Shoe conjures the legend of David and Goliath through yellow stilettos. 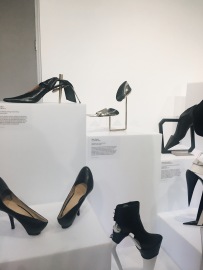 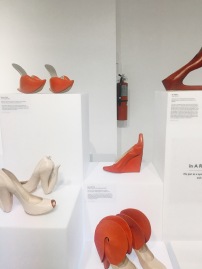 Finally, “Balance” looks to footwear as a potential conduit for flight, gathering together dynamic riffs on motion such as Neta Soreq’s Energetic shoes—made from a coil fitted with a shock absorber—and Aya Feldman’s HyBird 113—a series of slick, metallic heels modeled on outer space fantasies.

A Walk of Art: Visionary Shoes offers a wide selection of Bezalel scholars’ revolutionary contributions to their field. Each work is an individual masterpiece, yet despite the exhibition’s breadth, there are several notable commonalities among the assortment. At odd heights and jarring angles, the pieces conform to Oscar Wilde’s ideal of useless beauty in being nearly unwearable—instead, they intimate that greater relevance is to be found in their exquisite construction and cultural significance. It is quite remarkable that the scions of a people enduring daily strife could fabricate such dramatic and outlandish shoes so as to attract the attention of Lady Gaga, but in 1998 Kobi Levi did just that with the release of his Double Boots, which she later commissioned for her Born This Way music video. It cannot be known whether whimsical fashion is a means of escapism for these gifted pioneers, but what must nonetheless be said is that the delightful inventiveness they have pursued in shoe-making remains rooted in the very same texts and practices we consider essential to our national character. A Walk of Art does not simply merge fashion and art, but art and identity.