Above: on top, Salomon’s Self Portrait (1940) at the Jewish Historical Museum, Amsterdam; copyright belongs to the Charlotte Salomon Foundation 2017. On bottom, Serra’s Inside Out (2013) at Gagosian Gallery; copyright belongs to Richard Serra 2017, photo by Lorenz Kienzle. Via Artsy, edited in Trigraphy.

Lately I’ve been thinking a lot about the future and what it is I’d like to do with my life. In the process of making these considerations, a very natural and rather banal sense of impending doom has clawed its way into my conscience. This perception is not directly related to the political climate, though many in the art world and otherwise have been furiously invoking it at every turn to explain their surging anxiety. Rather, it correlates more closely with my upcoming graduation from high school. A typical knee-jerk reaction that people employ when experiencing this strain of consternation and fear is to dive back into their pasts. However, my retreat from reality in this vein is not total; it includes a fusion of something I’ve contemplated since childhood and something I’ve only recently discovered.

When I was little, I used to sit on the floor outside my kitchen and stare at a book (or more accurately, study its spine)—a catalogue of Charlotte Salomon‘s magnum opus Life ? or Theater ? (1941-1943). Now visible from my bedroom, Life ? or Theater ? chronicles the story of Salomon, a German-Jewish artist born to a wealthy Berlin household whose mother committed suicide when she was nine. Over the 769 individual pages that compose her Singspiel, or song-play, she explores themes such as death, romance, and family, touching on art’s lasting significance in the shadow of Hitler’s viciously xenophobic Third Reich. Intended to be a Gesamtkunstwerk, or “total work” in the tradition of Wagner, Life ? or Theater ? is painful, personal, and morbid. The pieces and their textual overlays are done in gouache , with haunting results: Salomon’s warm colors and saturated tones create a fragility and an intimacy reminiscent of Chagall and Ensor (even Maira Kalman), yet her narratorial captions ground the works in drama and fantasy. Upon actually opening up and perusing the tome, I was mesmerized by its ethereal, dreamlike feel, a quality I would later be reminded of in Munch. Letting her thoughts wander freely, Salomon traipses through past and present, portraying the Weimar bourgeois with a loving amusement and woeful regret that sticks out in one’s memory.

Painted while Salomon was hiding from the Nazis in the south of France, the oeuvre conveys her sense of displacement and anomie through warped, ghostly figures and their often comic and cheery interactions. Life ? or Theater ? has been compared to Anne Frank’s diary for its introspective spirit and cutting insights into the human experience, with Salomon’s grandparents and boyfriends among the cast of characters. The last few “chapters” are less detailed and more fluid, consumed with dark, choppy words rather than light illustrations, as if Salomon had prophesied her fate. In October 1943, she and her husband were captured and deported to Auschwitz, where, along with their unborn child, were likely gassed upon arrival.

The animated urgency that pervades Life ? or Theater ? reflects Salomon’s understandable need to impart her story as the Gestapo were closing in. Her obsession with mortality is depicted through various relationships and encounters, yet it remains not simply specific to Salomon’s ancestral history (besides her mother, numerous other relatives committed suicide) but also indicative of the literary and political climate. Life ? or Theater ? gets its name from the ultimate modernist question, asked by Salomon at the beginning of her epic: if meaning is so overtly absent from the world, is it better to take one’s own life or embark on something “wildly unusual” to disrupt the barbaric monotony? Of these two existential absolutes, she chose the latter, even setting the project to music. 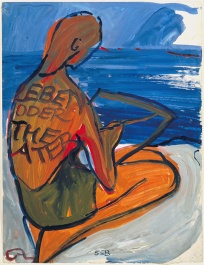 Above: the “signature image” of Life ? or Theater ? from its epilogue. The text reads— With dream awakened eyes she saw all the beauty around her, saw the sea, felt the sun, and knew she had to vanish for a while from the human surface and make every sacrifice in order to create her world anew out of the depths. And from that came Life or Theater ???

Salomon’s answer to the overwhelming sadness and emptiness she faced was a creative enterprise that has long survived her trauma. There is something impressive about her productive approach; by rooting art in life’s travails, she encourages a “just do it” mentality, suggesting that one must transcend hardships for the sake of beauty and, more pressingly, continuity. I became fascinated with Life ? or Theater ? when it was just a random, detached expression—one of many labels on a shelf—because the idea of a binary differentiating art from life prompted immediate uncertainty, even in my four-year-old incarnation. Today the doubts it conjures for me perhaps distort Salomon’s intended point, but nonetheless are the crux of their relevance. In my mind, to breakdown her title, “life” represents a path of pragmatism lined by politics and philosophy, while “theater” symbolizes another option entirely: visual engagement with the world. If Salomon’s version applies, one must prevail over the other in shaping the course of my future. Obviously it’s naive to believe that completely, as I am not old enough to be so rigid and didactic in my thinking (this statement, too, clearly partakes in stereotyping), but I’ll acknowledge there is a rubicon to cross, a point where one must decide what holds greater value. And so I’ll share another item I’ve come across that’s been an influence on how I see things, a source with a more flexible interpretation of art’s great call and life’s opposing push, that, without constituting a diametric response to Salomon, offers an excellent alternative.

In 1967, American sculptor Richard Serra began pondering words that could be exercised for inspiration in any medium (he is known for his large metal curves). This endeavor eventually filled two sheets, culminating in a handwritten list of 84 verb infinitives (e.g. to roll, to crease, to chip) and 24 possible contexts (e.g. gravity, entropy, nature) organized in four columns of script. According to the MoMA, which acquired the selection in 2011, Serra described the list as a series of “actions to relate to oneself, material, place, and process,” tackling art and life not as two abstract entities to be merged, but as the singular aim of a body entirely dedicated to its work.

After hearing about the list a few weeks ago, I have been experimenting with Serra’s instructions, and will say that his method is a surprisingly compelling antidote to my general unease. Each verb demands utter concentration and ignoring of content for visceral confrontations with one’s objects or tools. Everything happens immediately, without time for any laborious pondering or overarching designs, a construct that precludes the kind of internal angst Salomon and I are so wont to indulge. Life ? or Theater ? is a heading that shakes readers into submission and insists on thoughtful replies, while the anonymity of the verbs provides a chance for blankness and procrastination. Here Serra heroically preserves the mechanical, technical elements of art-making that are sometimes overshadowed by theory and exegesis, but all the more often by passive repetition.

Both Salomon and Serra’s treatments of art either as emphasizing Wordsworth’s “emotion recollected in tranquility” or purely requiring contact between hands and surfaces have quelled my concerns over what being brings. Whether or not life necessitates this marriage of meditation and movement that I have put forward, it seems to have helped me in wrestling with the worries of maturation.